My whistle stop tour of Mediterranean recipes drew to a close yesterday, and what a finale.

This Monacan soup was rich with flavour. Traditionally topped with parmesan, but here a cashew garnish was added instead.

Lebanon Fatte is a simple dish with toasted breads, chickpeas and a garlic yoghurt drizzled over. The resulting textures and flavours were wonderfully moorish.

This Turkish style pizza is usually served with herbed minced meat and vegetables. Here an irresistibly tasty sauce was made using walnuts, beetroot, tomatoes and spices including cumin, cinnamon and paprika. I would never have imagined a cheese-less pizza could taste so good but this is one of the tastiest pizzas I’ve eaten.

These Montenegrin doughnuts were simple to make and heavenly. A dough mix of apples, flour, yeast and sugar was deep fried until golden brown and then sprinkled with sugar, agave and mint. Naughty but worth indulging.

In the morning we were given a demonstration on how to make a vegetarian fish course. A blend of seaweeds and spices were combined with palm hearts to create a mouth-watering appetiser. Using a folk you mash the spices in with the palm hearts to produce a texture and taste similar to white fish. A squeeze of lemon brought out the flavours. 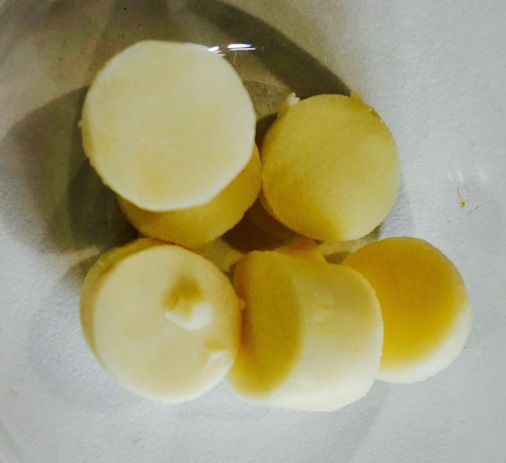 Why are the school trying to replicate meat and fish dishes? The answer is many vegans, having been brought up as meat eaters and still want to enjoy these flavours more commonly associated with meats and fish, just skip the animal cruelty part.

This 4 day course demonstrated how easy it is to create meatless meat dishes. We can trick our senses into believing anything.  Here, is the “Chickun” I made for our Syrian Fattoush Chikun Salad. We used King Oyster Mushrooms, removed the tops and shredded the stalks to make them look like chicken strips. We added meat seasonings and the result was pretty good (my efforts more successful in looks, than in taste).

There are a whole range of spice mixes that we associate with certain meats. If you are interested in creating meatless dishes then I’d recommend heading  to One Green Planet for some handy tips.

After class I had the pleasure of heading to Cologna de Saint Jordi with a few of my fellow chefs. The waters were a mix of bright blues and greens with white sandy beaches.

Later on, in the evening we visited Bon Lloc in the centre of Palma, one of the oldest vegan restaurants on the island. 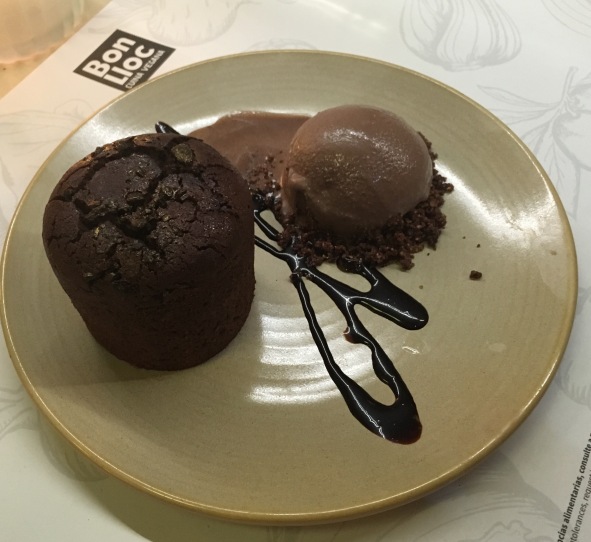 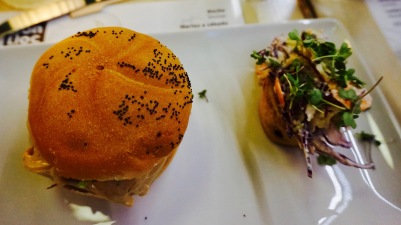 I ordered their vegan burger and raw cannelloni (filled with a walnut and tomato paste), and finished off with a rich chocolate coolant. The presentation and flavours were excellent.